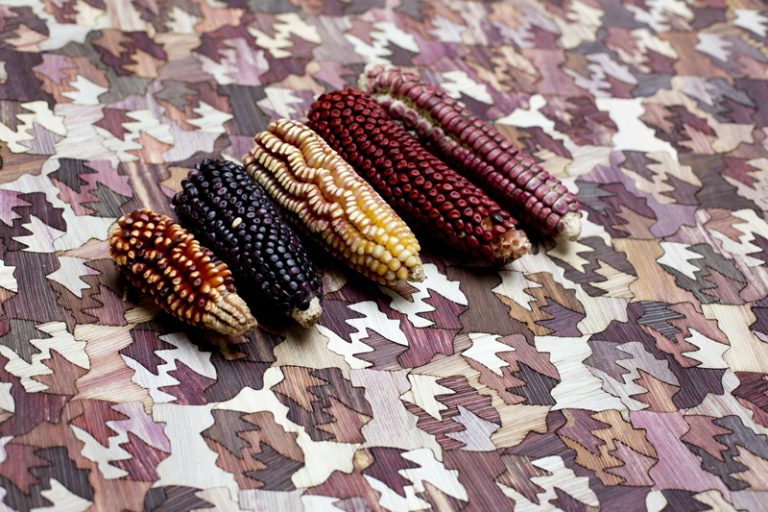 Mexican designer Fernando Laposse has created a new veneer material made with husks of heirloom Mexican corn, in an effort to help preserve ancestral varieties of corn.

Known as Totomoxtle, the material is made from colorful husks of the traditional corn varieities grown in Mexico, which are naturally colourful.

Totomoxtle is used to make furniture such as lamps, vases and decorative wall panels. The parts – corn husk residues – that can not be used in the production of the veneer material is then composted to re-fertilise the soils in which the maize grows.

Totomoxtle focuses on regenerating traditional agricultural practices in Mexico, and creating a new craft that generates income for impoverished farmers and promotes the preservation of biodiversity for future food security.

The number of native varieties of Mexican corn is currently in decline, due to international trade agreements, aggressive use of herbicides and pesticides, and the influx of highly modified foreign seeds with its standardised features, such as bright yellow corn. Additionally, the majority of the corn harvested worldwide is used to feed cattle or transformed into secondary products that range from sweeteners for processed foods to bioplastics, therefore nutritional quality is not a priority.

Product and material designer Fernando Laposse has teamed up with the indigenous community of Tonahuixtla, a small village of Mixtec farmers and herders in the state of Puebla. The arrival of industrial agriculture to the area and the lack of employment opportunities have seen mass migration, the erosion of the land and the loss of native seeds in recent times.

Since 2016 and with the support of CIMMYT, the world’s largest corn seed bank, the farmers and herders have been slowly reintroducing native seeds in the village and returning to traditional agriculture. The husks collected from the harvest are now transformed by a group of local women into the veneer material, Totomoxtle, thus creating much needed local employment.

Fernando Laposse says: “At the moment the only hope for saving the heirloom species of maize lies with the indigenous people. They continue to plant them out of tradition rather than financial gain.

“[They are aiming to highlight] the importance of preserving the ancestral corn seeds, not only because of their nutritional properties, but because they might hold the solutions for the climate challenges that lie ahead as many of these varieties have been bred for centuries in incredibly hot and dry conditions.”