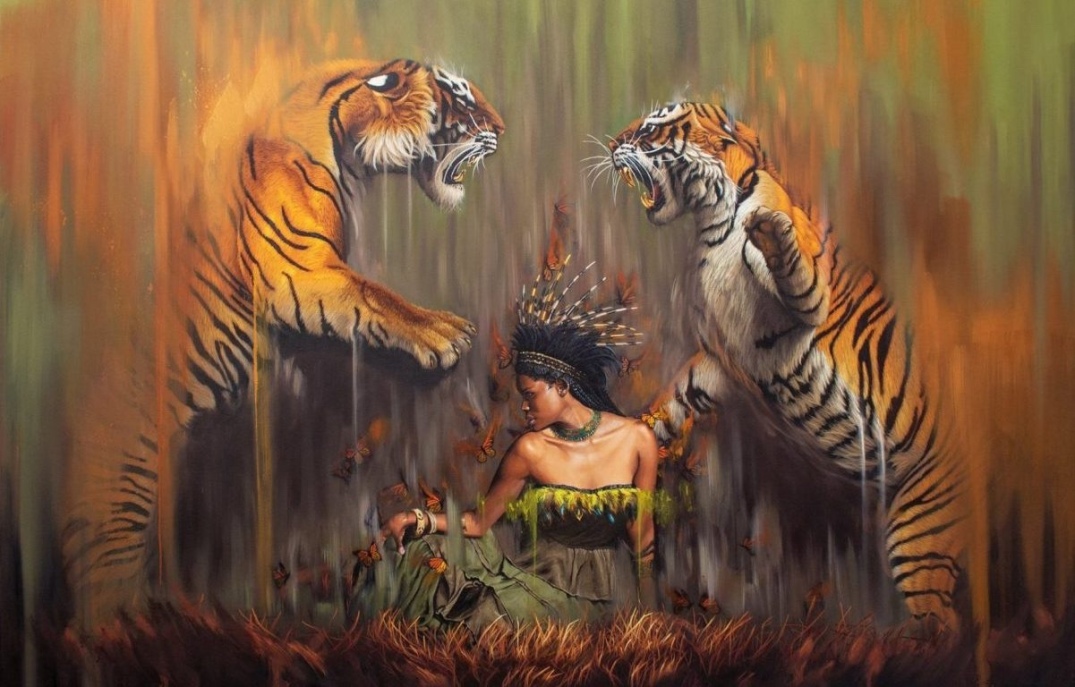 Urban artist Sonny – known for his giant murals of endangered species adorned on walls worldwide – has created a new series of animal paintings which seek to explore themes of tribal connection and ancient wisdoms.

Putting tigers, a lion and an ape within the context of their natural environment, the Johannesburg-based artist has a deep interest in ancient traditions, tribal relics and heritage where it relates to the value of the natural world.

Fascinated by wildlife from a young age, the British-born artist has since become known worldwide for his wonderful large-scale wildlife murals that are scattered across the globe.

Endangered species and conservation are just some of the environmental issues that Sonny has taken to the streets of London, New York, Ireland, Johannesburg and more to illustrate on walls as a way to imprint into people’s awareness and to encourage them to protect the animals for future generations.

From the tigers, lions, polar bears, grizzly bears, birds and rhinos emblazoned on walls, Sonny’s artworks are beautiful and fascinating, capturing the true essence of these mighty beings of the animal kingdom with every intricate detail – honouring the true beauty and power of these animals.

In 2017 Sonny launched his To The Bone project with a global mural tour that brought some of the world’s most iconic and endangered animals into urban environments around the world.

The animals depicted in To The Bone once roamed freely and in numbers across the globe, before intruders invaded their land and pillaged their forests, killing for profits and power. To The Boneconveys a deep love of and respect for the animal kingdom, as well as a sense of anxiety, guilt, and outrage towards crimes perpetrated against our wildlife.

The To The Bone project, which culminated in Sonny’s first solo exhibition in New York in 2018, was accompanied by a series of skull sculptures, made from polyurethane resin which “with their golden teeth ablaze, the skulls [of endangered species] invoke an appreciation of the might and power of these creatures, while serving as a tangible symbol for what the future may hold”.

Every month we select some of the best new urban artworks for you – including some street art masterpieces. They’ve been created over the last few weeks by artists in cities throughout the world including Paris, New York, London, Taiwan, Casablanca and Cancun. We have a mixture of new talent and old names this month.… via […]