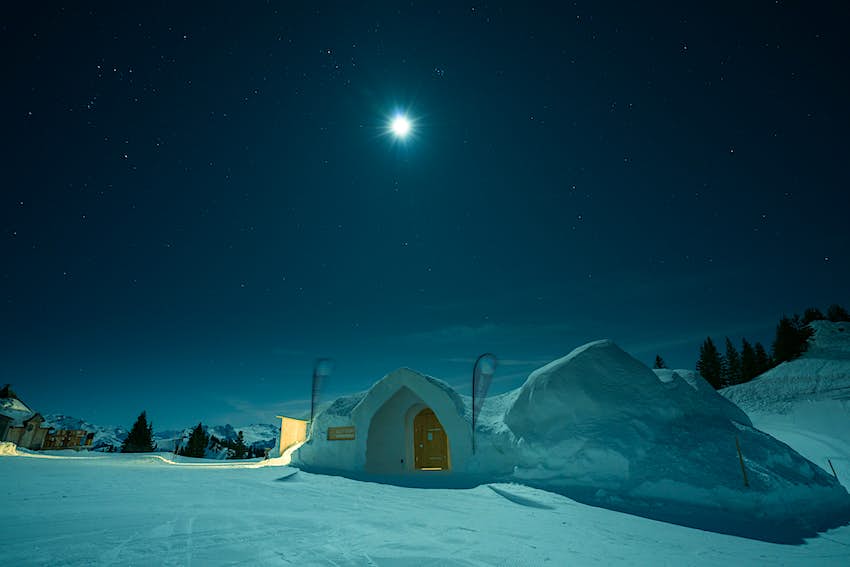 In longitudes where long johns are all but compulsory and rugged alpine regions where the snow tumbles down sideways, creative grizzled folk brave the cold to cut and chisel and craft chunks of frozen water into sparkling ice hotels, uplit overnight igloos and snow-covered villages for mere non-mountain mortals to sleep over.

Built using traditional igloo techniques, but with tunnels connecting each of the 11 rooms, it takes around 3000 hours to create the Iglu Dorf hotel in Gstaad, Switzerland each winter. With breathtaking views out across the crucible of the vast Bernese Alps and its crown of fir trees, this slice of wonderful isolation can be enjoyed by up to six guests in a room overnight.

With a sauna and swimming pool just outside as well as homemade mulled wine and a traditional hot cheese fondue, this is Switzerland in its purest mountain mode. Iglu Dorf also builds overnight igloos in Davos-Klosters, Stockhorn and Zermatt in Switzerland as well as on Zugspitze in Germany, and the Kühtai ski area in Austria.

First built in 1989 in Jukkasjärvi, Sweden, this is the original Icehotel. It’s crafted annually from 2500 two-ton blocks of snice (snow and ice) plucked from the vast meandering Torne River. At the end of the season it simply melts and the water returns to the river. But whilst it’s up, its shimmering catenary arches and individually-designed rooms with snow statues and ice artwork make it a startling imaginative triumph.

Located in northern lights territory, high up into the Arctic Circle, guests can also try husky sledding, snowmobiling and snowshoeing. For the artistic, there’s ice sculpting as well. Can’t wait for winter? The Icehotel 365 offers 20 suites, an ice bar and an art gallery all year round. Plus it’s run entirely on renewable energy.

Rovaniemi‘s Arctic SnowHotel is in Lapland, where Santa Claus kicks back for 364 days each year. Standing on the toes of the Arctic Circle, this part of Finland cycles through eight seasons, but it’s the sparkling magic of winter that’s most alluring: a calming white-scape of thick, crunchy snow; the swirling purples and greens of the northern lights; the excitable yap of huskies waiting to pull their sledges.

But hidden amongst these miles and miles of white wilderness is Arctic SnowHotel, a fully-functioning 30-room igloo that’s built afresh each winter using ice from the nearby Lake Lehtojärvi. The bedrooms are built of snow and ice, as is the bar, the restaurant and the chapel. Snow saunas and outdoor hot tubs also help make the most of this winter wonderland.

Sculpted deep beneath the magnetic gaze of the aurora borealis, the world’s northernmost ice hotel in Alta, Norway, is also one of the biggest. Some 250 tons of ice and 7000cu meters of snow are used each year to freshly carve its 20 double rooms, three family rooms and five suites.

Located on the banks of the Alta River, a short snow sled from the Cathedral of the Northern Lights, the Sorrisniva Igloo Hotel also has uplit ice sculptures, an ice bar and even its own ice chapel for couples hoping to melt hearts. The beds have reindeer leather as a natural sleeping mat and sleeping bags capable of withstanding temperatures of -22°F (-30°C), but the sauna (no, not located inside the ice hotel) opens at 7am each morning. Just in case.

Created from 350 tons of crystal clear natural ice and 20,000 tons of snow, this extravagant SnowVillage in Kittilä, some 125 miles (200km) into the Arctic Circle, is crafted with the care and precision of a medieval church. Decorated with ornate ice sculptures that change year-on-year, each work is lit up in the swirling colors of the aurora borealis.

As its name suggests, this isn’t just an ice hotel. There’s a restaurant made from glacier-clear ice, a chiseled ice bar that gleams like a diamond, and a beautiful ice chapel too. Each snow suite has been individually designed and brought to life and, yes, there are saunas nearby as well.

SnowVillage is open from December 21–April 4.

The Ötztal in Tyrol is one of those striking Austrian gram-oramas: a sweeping valley of glittering chalets dwarfed by the brooding dark hulks of snow-covered schist and gneiss striding starward. But up here, nestled some 2670ft up the mountainside in the ski region of Hochötz, you’ll find Schneedorf Igloo. Beneath what looks like a fresh dump of plump white snow is actually a hotel with enough room for 44 people to survive a blizzard overnight.

The silence is rejuvenating at night as the temperatures drop and the constellations start to twinkle against winter’s blueberry-dark sky. Dinner is gooey cheese fondue and the on-site snow bar has enough potent liqueurs to keep guests warm until sunrise. Thankfully, the igloo toilets here are heated.

Japan’s only ice hotel is a shades-down dazzler. Surrounded by uplit birch trees, the exclusive genetically-domed igloo sleeps just two people a night on its stylish ice beds, with an outdoor arctic bath and a heated dressing room to keep their lucky bones warm.

Located at Tomamu in Hokkaidō, near the smooth wide runs of Tomamu ski area, the temperatures regularly tumble to -22°F (-30°C). That may sound like visitors are consciously choosing to be cryogenically frozen, but it also means that Ice Village Tomamu guests have access to an ice rink, an ice slide, an ice instrument room, an ice chapel, an ice bar, an ice sweetshop, an ice bakery and – you’ve guessed it – an atelier that only uses ice.

North America’s only ice hotel is in Saint-Gabriel-de-Valcartier, Canada, and will be cutting back on the poutine this winter to present a slimmed and trimmed version of its typical regal self because of COVID-19. However, that doesn’t mean the ice chandeliers and hand-chiseled snow sculptures will come crashing down – if anything, this luxurious igloo, which comes complete with an ice chapel for weddings, becomes even more exclusive.

Hosted on the outskirts of Quebec City, master craftspeople detail the igloo’s fine frozen furniture, gleaming ice entranceways and curved snow roofs each year. With hot tubs and a sauna under the stars as well as real fires in each room, no guests should go to bed cold. There are even real mattresses and an isolating bed sheet to ensure a great night’s kip. Hôtel de Glace usually opens earlier than January 2, depending on the weather.

So far up the longitude meridian that there’s only really Svalbard in the way of Kirkenes and the North Pole, this wonderful Norwegian snow hotel is open 365 days a year. In the cold, blizzard-blanketed winters this is reindeer and husky country: a quiet, isolated region endured by only the most hardy of creatures. But for overnight guests, it’s a beautiful once-in-a-lifetime spot for a winter vacation.

Inside the plump hotel itself, artists bring each bedroom to life with snowy bas reliefs of local winter animals like wolves and owls, whilst specialist ice sculptures that line the halls and ice bar area turn frozen water into glacial artworks worthy of Frieze Art Fair.